In 1960, LeRoy Anenson was called to start a new congregation in Coon Rapids, MN. After knocking on many doors and sending out letters in the neighborhood with Tom Steenberg, a Luther Seminary student, Peace Lutheran Church held its first gathering, Sunday School, on September 11, 1960 with sixty children in attendance. The next week, the first worship service was held with 28 people in attendance. For the first seven months, worship services and Sunday School were held at Northdale School (later named Sorteberg Elementary) on Sundays. Choirs and meetings were held at the parsonage. 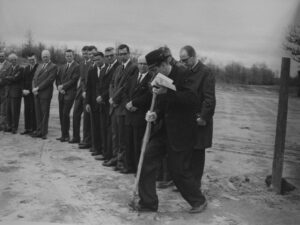 A ground breaking ceremony occurred on November 6th for the first building on the corner of Northdale Blvd and University Ave. Building began on the church and a cornerstone laying service occurred on January 8, 1961. The congregation became officially organized on December 11, 1960 and “Peace Lutheran” was suggested by Pastor Anenson and his wife Dorthy, which was accepted by all who were present that day.

Peace Lutheran continued to develop and grow as circles were officially organized, staff was hired, and an organ was purchased. The church building was completed, pastors and staff moved into the offices and a dedication day services was held on April 23, 1961. The halls filled up with people as services were held, Sunday School began, Vacation Bible School was held, and as Peace Lutheran began to fulfilled God’s mission.

Peace Lutheran began to move quickly as they hired Neil Overby in September 1961 as Lay Assistant and Director of Music and Pastor Gilbert Bretheim, a retired pastor, as visitation pastor in 1962 to visit people in their homes to bring them God’s word. Marion Gustafson was also hired as Parish Secretary in 1963.
Construction began again and the second education unit (B-wing) was dedicated on April 7, 1963. Another construction project began in 1965 and on April 3, 1966 the new sanctuary, offices, and C-wing were dedicated. 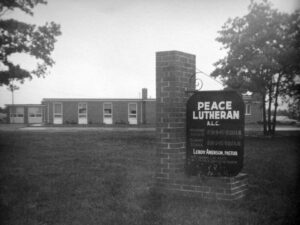 Construction began once again in 2002. The garage was built and finished in the summer. The building of a new kitchen, fellowship, and offices were dedicated in 2005. Lastly, the sanctuary was remodeled and dedicated in 2007 as well as the B-Wing was renovated in the Fall of 2008.

Many other significant events occurred as the church grew; including, the formation of Cub and Boy Scouts of America in 1962, the organization of Pioneer girls, with 61 girls, in 1965, the stained glass windows in the north transept were installed in 1970, a nursery school was licensed in 1972, arsonists set a fire damaging the educational area and smoke damaging the rest of the church on August 14, 1973, the education and B-wing were rededicated in 1974. The first confirmation retreat and Peace Lutheran Church Women’s first bazaar occurred in 1976, the parking lot was completely black topped in 1980, the Nursery School name was changed to Pre-School with 100 students in 1982, the mortgage for the parking lot was also burned in 1982, the new Rodgers electronic/pipe organ was installed in a reconfigured altar area in 1986, a computer was installed in the office in 1987, the Articles of Incorporation for the Endowment Fund were accepted in 1990, the hand bell choir was organized in 1993, land along University was purchased in 1994, and using the Callahan process, the congregation looked at the mission of Peace and the building needs to carry it out. An architect was hired and a preliminary plan drawn. The capital fund appeal kicked off with the theme “Catch the Vision” in 2001.

Many Mission Trips were planned and attended throughout the years including an Alaska mission trip in 1987, a Maine mission trip in 1990, and our most recent mission trip in the summer of 2010 to St. Louis, MO. Programs and activities continued to be added with Spirit Time beginning in 1998, the Friendship Festival in 1999, Stephen Ministry in 2002, Family Table Meal in 2002, Blessing of the Animals in 2004, Spring Fling in 2005, Summer Lunch Bunch in 2009, and we look forward to holding our first Family Promise of Anoka County in December 2010. The worship have changed throughout the years as well; especially when the ReNew Service was added at 11:00am, which is led by the PLC Band, when the screens and projectors were installed in January 2005, and when the 9:45am Essence Service was introduced featuring Gregg and Trychia in September 2005.

Pastors who have served Peace Lutheran